What were we thinking?

It sounded like a good idea at the time (as all disasters or near disasters may seem at the out set).

I need to clarify that I wouldn’t say this was a complete disaster or anything by any stretch, but I will say that my heart pounded as if I were doing burpees and it’s an experience I’d prefer not to repeat.

I recently had an extra day in San Diego after a meeting. My good friend, Josh asked me if I’d care to hang out for a few hours. He lives in Cali and had a bit of time before he was heading back home. He suggested Tijuana and I stupidly jumped at the idea. I hadn’t been there since I was a kid and it sounded like a fun adventure for a morning. I mean how often do I get a chance to visit a foreign country for a few hours?

It’s surprisingly easy to walk across the US-Mexican border, which probably should have been the first tip off. Once across the line, we saw a mile long line o

f people waiting to get across into the United States. Of course this should have been the second tip off.

Josh and I dumbly assumed that the border hadn’t opened for the day (like a bank for example) and that once it did, this line would dissipate.  We merrily walked into town to explore a little. I didn’t really know what to expect since I hadn’t been to Tijuana since I was 10 when I went with my good ole Granny. Josh said it’d been 15 years since he ventured across the line.

Honestly, I was saddened by the poverty that was evident. I was struck by store front upon store front selling the same things. I wondered about what kind of quality of life the great people of Mexico enjoyed when I saw many things in Tijuana. I know that this little border town is not an indication of all Mexican life, but the experience made me very thankful for the sweet little bubble I live in. 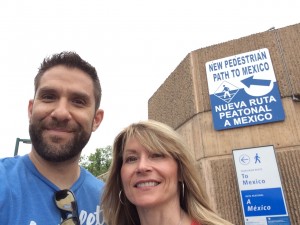 We spent about an hour wandering around. Josh bought some ‘junk we didn’t need’ as many of the storeowners put it. We decided we were done our adventure and made our way back to the line to get back into the USA.

Apparently the border had been open all along and the line at the border crossing had since doubled. It was miles long. I calculated that I had 25 hours to catch my flight back to Canada and wondered if I’d make it.

As we went to line up, a man asked if we wanted to skip the line and for $5 each we could get in a van and skirt the line. Josh jumped at the idea. We were led into a back alley ‘parking lot’ and shuttled into an old van where 16 more people were jammed in.

I was more than a little nervous as I asked the non-English speaking people ‘this goes to the USA border??’ It was all pretty shady looking and I was pretty nervous as to where we were actually going.

We took off and went into the lane indicated that would fast track us to the border. (Phew!) Our ride was short lived as we came upon a mile long line of vans and buses around the corner.

The driver stopped the rickety van, turned it off and proceeded to open the doors and windows. People chattered away in Spanish as Josh and I looked at each other wondering ‘what the heck?’

And sat some more.

We saw several people walking forward toward what we assumed was the border. About an hour and a bucket of sweat later, Josh and I decided to walk ahead. A huge bus was in front of us so at least we wanted to be able to see what was in front of it.

Turns out the folks walking were being shuttled into the bus. For $5 each we could now get on the bus and it would get us to the border faster (technically that was true since it was just one car length in front of the van we were in).

We realized what the scam was but I had to pee so badly that I was willing to pay an extra $10. I got to pee in the foul smelling and filthy facilities and then sit in the slightly air conditioned rickety bus. The bonus was that we got to also listen to piped in accordion music 😉

And sat some more.

About an hour later we had inched toward the border. We could spit to it, but still sat on the bus. 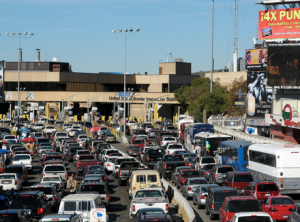 Eventually, we were let off the bus and shuttled into what I thought would be the security area for border processing. Instead, we got into another endless winding line up. One line was shorter so Josh chose it and we inched our way towards the security area.

It became apparent that we didn’t have the correct documents to be in the shorter line. When it was finally my turn, I nervously went to the border crossing guard first and handed him my Canadian passport. He looked at me like I had taken leave of my senses (which I probably had) and told me I was in the wrong line and I really should be sent back. I pulled the ‘girl card’ and looked like I was going to cry (because I felt like I probably would) as I apologized profusely stating that I hadn’t ever been in this situation before, couldn’t read the signs and didn’t understand the process. He took mercy on me and let me pass after some questioning, but not before I asked him if he would give the same courtesy to my traveling companion  gesturing toward Josh. He asked if Josh was a trouble-maker and I resisted my normal sassy answer that would throw Josh under the bus.

I had to then leave the building wondering if Josh would make it through. I knew that Josh didn’t even have his American passport so in theory he should never be allowed back in the country. I nervously awaited him outside the building. I had Josh’s car keys in my pocket and I wondered what the heck I’d do if he were detained.

Thankfully Josh coolly walked out of the border crossing building having been yelled at and berated for his foolishness (that he smartly nodded and accepted).

Turns out what was meant to be an hour adventure into Tijuana, was an all day affair learning to appreciate everything about Canada and the good ole USA. We were pretty happy to find Josh’s car and drive back to San Diego.

To all my American friends, I hope that you’ll enjoy your Memorial Day. 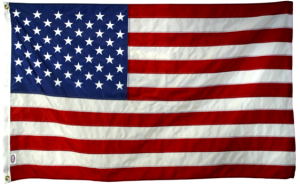 This recent adventure to Tijuana, made me realize what a fantastic place the United States of America is. I truly love the USA, but of course, I’m a very proud Canadian and sport my Canada flag and belt buckle everywhere I go.

(I mean no disrespect to Mexico or it’s fine people, I’m sure they’d agree that the border crossing experience isn’t one that anyone would relish.)