I got a team of boot camp clients and friends together yesterday to head to one of the evacuation areas here in Calgary. We went equipped with rubber boots, gloves, cleaning supplies and elbow grease.

I wasn’t really prepared for what I saw. Holy cow, water is very powerful.

But so are Calgarians. I couldn’t believe the huge numbers of people out. The streets were crowded with like-minded folks. Those that were short on elbow grease had wagons of baked goods, sandwiches, water, even beer. There was so much food I’m sure that some of it would spoil in the heat.

We ended up at a home that was completely ruined. This family had the main floor of their home stripped to the studs, we hauled debris out. They had moved some belongings to the second floor, but most of it was trashed. 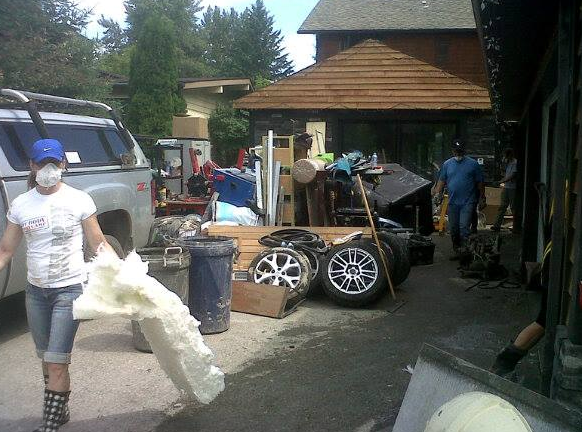 Another job was to gut the garage. We emptied it and then started to take down drywall, insulation and haul everything to the curb. There was a constant flow of volunteer pick up trucks. We formed a line of about 12 pairs of hands. We passed debris into and out each set of hands to get everything into the pick ups. Piles of debris, six feet high were gone within minutes. 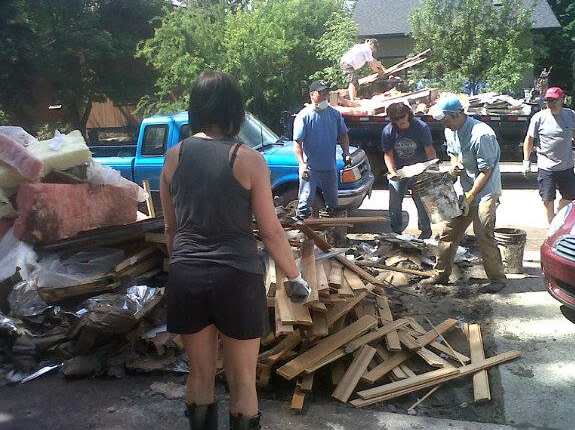 It was a completely heartwarming experience to see what many hands could do.

When we were no longer needed at that home, we walked the street to offer our help elsewhere. There were so many people out that we were turned away at some places.

We ended up at a home to clean. We were asked to clean bathrooms and floors. It appeared that this home wasn’t ravaged by the flood so much as by dirty living 😉 It was too funny, my partner in dirt, Jolleen and I decided that this homeowner wasn’t in need of flood relief so much as housecleaning lessons. Turns out it takes all kinds…we worked for a bit but felt that others needed our help more so we took our leave.

On the whole, I’m so proud of how my city is coming together to put lives back together. I know that our group’s contribution can’t be credited with much, but when everyone does a little bit, then things get done.  The hand written thank you signs on yards and in windows were overwhelming and it’s just good to know that we made a small difference.

With so much food around and the heavy lifting and grunt work we did, I told my clients/friends that I was with that all food was ‘calorie free’ yesterday. Of course that was a big fat lie, but we all laughed. I’m pretty sure that almost anything we ate in the day got burned off working. We could never burn off those calories if we ate them late at night.

If you want to know what you CAN and CAN’T eat late at night to help you get and stay lean, my pal Joel has a report for you here.

He’s got the 4 BEST foods to eat before bed.

As far as calorie burning in the day? Spending a day doing flood relief took care of that for our group yesterday. Good times 😉

I hope you have opportunity to volunteer somewhere sometime, it feels about as good as a sweaty workout.