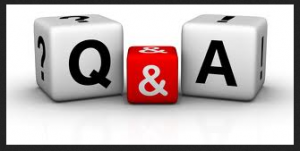 Question: I have knee pain, is it okay to squat?

Answer: My friend and ‘go to’ rehab guy is Rick Kaselj. I’m going to quote some of the studies that he’s pointed me to in order to answer this one. In a nutshell, here’s what he’d say if you have knee pain when squatting:

Stay tuned for more great stuff from Rick and knee pain next week. He’s been working on a program to help those of use that suffer from knee pain.

I may have ruffled some Crossfitter’s feathers this week by mentioning that I’m not a big fan. I’ve been telling you about a program called ‘The Unbreakable Bad Ass Blueprint‘. I wanted to let Travis Stoetzel clarify the difference between his program and Crossfit.

Answer: Functional training uses and promotes nothing but functional movements such as gymnastics (bodyweight training), Olympic Lifting, Power Lifting, Strongman, Kettlebells.  This type of training beats your typical bodybuilding style, machine based training any day (as long as it’s used correctly). It gets you lean, strong, and highly conditioned.

Question: What’s the difference between the he Unbreakable Bad Ass Blueprint and Crossfit?

Answer: I’d like to think that my program takes all that’s great about Crossfit and eliminates the downfalls and there are several downfalls to Crossfit training:

-Lack of Progression –   The bottom line is, if you don’t follow a set of solid progressions, you’ll more then likely get hurt.

-Crossfit is competition based – NOT everyone is a competitor. Folks need to train to their best ability, but understand what their limits are. My program challenges people to compete with themselves to make improvements.

-Lack of Programming – No progression, no programming = no REAL plan.  When you don’t have a plan, you plan to FAIL.  When it comes down to training and getting real results, you’ve got to follow some sort of program to avoid injury.

If you want to be a Bad Ass without the injuries, check out Travis’ program to see if it’s right for you.

I’ve been puffing Travis up all week, but only because he’s an original bad ass and his training is legitimate. You’re gonna love (to hate) it.

My fitness boot camp did our annual fundraiser this week called the ‘Lil Black Dress Workout’. Everyone, including the dudes, came to workout in a black dress.

This year our charity was my local church who’s sending a team of youth to Mexico to build homes for impoverished families. I got several other Fit Body Boot Camps across the world to join in the fun. We all did the same workout, got sweaty and made a difference in the world. I think it’s pretty cool when that can happen.

If you want to make a donation, I’d be grateful, here’s the giving page. This page is one that my daughter set up, my son is also going on the trip. All funds go towards getting the team to Mexico, building supplies and any extra goes to the community. I chose this charity because the experience has had a profound effect on my children as they see how a week of their time can literally change lives.

PS Sometimes the link to that giving page expires and I haven’t quite got it figured. If you want to give and don’t know how, just let me know and I’ll send you a fresh link.