Good news….well, I think it is anyway… 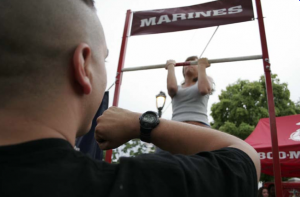 Recently, I read that according to USA Today and several other sources, female Marines soon will be required to perform pull-ups, just like male Marines do, as part of their annual physical fitness tests.

The physical fitness test is one of two strength and endurance evaluations all personnel must pass each year.

As part of the physical fitness test, all Marines do sit-ups and conduct a timed three-mile run. Additionally, men have been required to do pull-ups while women, viewed institutionally as having less inherent upper-body strength, have been required to perform what’s called the flexed-arm hang, hoisting themselves over the pull-up bar and holding the position for up to 70 seconds. Marines are rated based on their overall performance on each section of the test. (If you want to be fit as a Marine, check THIS out, the creator of this program actually trained Marines to get in shape for duty.)

During the coming year, as the service adjusts to the change, female Marines will have the option of doing pull-ups or the flexed-arm hang during their test. But come 2014, they will be required to do at least three pull-ups to pass the physical fitness test, with eight needed for a perfect score on that portion of the test. (Men must do three pull-ups to pass the test, with 20 required for a perfect score.)

It’s not immediately clear why the Corps has changed the fitness requirements now.

The reason I think this is great news is that it’s time women get over the ‘I can’t’ mentality that’s then reinforced by people that are supposed to be ‘experts’. I have the utmost respect for anyone in the Marines, military, law enforcement, fire fighting, that sort of thing, and if a women chooses that as a career path, then to me she should be able to perform the same tasks. I like that the basic requirement is three pull ups for both men and women, but for a perfect score women only have to do 8 while men need to do 20. I think this is fair and reasonable.

All women can stop saying that ‘even the Marines’ can’t do pull ups. 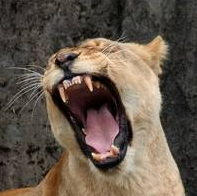 So, it’s time to kick up efforts to get that first pull up if you haven’t yet. If you’re a man, you better stay ahead cuz the girls are hot on your tail…

One of my favorite moves to help with the pull up is the band assisted pull up. It tops the assisted pull up machine hands down and it really gives you the feel that you’re doing the movement. Building kinesthetic awareness is really important. In fact, part of the learning curve to doing a pull up involves your nervous system laying down neurological pathways that are used repeatedly in the strength building process.

With the band assisted pull up, you need to stabilize the body and use your core. You can start to use a small ‘kip’ with the band as well. It may sound like I’m all about ‘controlled cheating’, I’m not, but if you can’t get a single pull up and a band and a kip will help you get to the first or the fifth and you’re not at risk of injury, why not? There’s plenty of time to perfect a non-kipping unassisted pull up once you’ve got the movement under wraps.

The second benefit of the band assisted pull up over the assisted pull up machine is that the gives you inconsistent  support. You’ll get more help at a full hang position, where you need it most. As well, you can get bands of different thickness so you can swap out a band that provides less support as you get stronger.

So if you’re trying to get your first, or add reps to your pull-ups and looking for a way to mix things up, I highly suggest giving band assisted pull-ups a try.  I’m sure you’ll see quicker results.

Here’s a fun exercise…every opportunity you get, do 1-3 pull ups where ever you go. So if you see a bar in your home, do 3 pull ups ever time you walk by it. If you see a suitable bar outside, in your office, where ever you go, bust out 1-3 pull ups. You’ll be surprised how this will build strength. For those of you that haven’t mastered your pull up yet, you can still do the random pull up exercise, but they can be assisted pull ups. For example you may jump up to the bar and you’ll do a slow decent. This will really build your pull up power…For help with YOUR pull ups, grab my program.

And how about a workout created for Marine’s getting fit for duty? My friend, Jason Klein’s job was to get Marine’s in tip top shape. He created the Marine Body with follow along videos for each and every workout, here’s a sample:

By the way, if you haven’t picked up the Marine Body this week, you’re really missing out. Jason trained actual marines, so he knows the intensity needed to get in top shape. The good news about Jason is that he’s got modifications for you (a bonus of follow along videos), so whether you’re in top ‘Marine’ shape, or if you’re a ‘would be Marine’, he’s got you covered.