Recently both the New York Times and the Globe and Mail published this ‘fact’: women ‘CAN’T do pull ups. 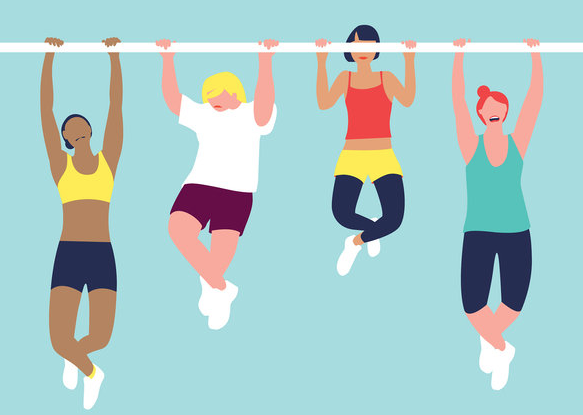 A study at the University of Dayton took 17 normal sized women and had them ‘train’ three times a week for three months. Apparently, the focus of the training was on weight lifting to increase bicep and back strength and aerobic training to lower body fat. At the end of the study, women had increased their upper body strength by 36% and lowered their body fat by 2% but only 23% (4/17) could do a single unassisted pull up.

The professors of exercise physiology were dumb founded.

One reason women were unsuccessful at performing pull ups they concluded was due to the fact that women have higher percentages of body fat and an inability to be able to lower body fat into the single digits the way men can. Men can ‘conceivably’ get to 4% body fat while women can only get to 10%. Also the lower testosterone levels in women is also to blame as this inhibits muscle development and encourages fat storage.

‘Experts’ claim that pull up success is a combination of strength, low body fat and short stature.

They claimed that those of shorter stature have more of a mechanical advantage than their taller counterparts. This is due to the fact that the longer the lever, the more difficult a pull up is to perform. An interesting related fact is if you compare a smaller athlete to one with the same build but is 30% bigger, the bigger athlete will be only about 20% stronger even though they have to carry about 30% more weight.

Last time I checked the world’s population was in the billions. A sample size of 17 women for the experiment is hardly a fair representation of our fair race don’t you think? That’s the first hole in the study…

Next…I applaud the University of Dayton for ‘proving’ that three resistance training sessions a week for three months is insufficient for the ‘majority’ of women to be able to master the pull up. It’s a fact, unless a woman is a freak of nature, it’s unlikely that this workout protocol is going to bring much pull up fame.

But, let me tell you that intense and proper training for a little longer will yield better results.

And if three months doesn’t yield a pull up, then maybe four months will. The point is, it may take a little longer for some, but it’s POSSIBLE.

Why would you want to?

Well, if that question popped into your head, I’m glad you asked…

Pull ups are downright empowering for women. If you can do a pull up, you can conquer anything as far as I’m concerned. It takes mental toughness to stick to a pull up plan and that same toughness can be applied to any aspect of life.

Trust me, I’ve been through many rough days this last year alone, as I know many of you have too, and I’ve relied on the strength that I tap into when I workout to get me through tough times.

Pull ups build fortitude and a kick a$$ physique to boot. The pull up shapes and tones the  upper body like nothing else. Paired with the push up,  you have a perfect upper body plan.

It’s not magic or osmosis that you’ll gain enough strength in the correct muscle for pull up power to blossom with resistance training alone. For the most part, I can increase strength in pretty much any client with a three times a week program of resistance training, but unless it’s specific and targeted training with coaching on how to ‘engage’ the correct muscles to contract, the pull up will be elusive.

The pull up is a ‘learned’ movement. You have to connect the mind to the muscle. I know that sounds ‘woo-woo’ and all, but people are actually stronger than they think. And if they can ‘think’ pull up, that is, if they can engage the stronger muscles of the back, then they’re more likely to be successful at pull ups.

Pull ups require a whole lot of sweat, training to failure and never giving up.

And of course, who better to do this than women? Who, as far as I’m concerned tend to be the rougher of the genders (shsh, don’t tell the guys, we all know we let them think they’re the tough ones).Also, women are generally of shorter stature than men, so there goes that argument.

Do women have to work hard at achieving a pull up? Of course they do, but so do men.

Here are some tips women can use to get them doing pull ups:

•    Luckily, women generally have shorter levers than men, that is, they’re shorter and lighter.
•    THE most important thing to remember is getting the body UNDER the bar rather than trying to get the chin up and over the bar. This helps to engage the stronger muscles of the back.
•    A simple vertical hang will help to develop grip strength. You can do this assisted if you can’t hold your entire body weight at first.
•    Assisted pull ups are a great way to get started.
•    Core strength is essential, one way to develop this through hanging leg raises.
•    Other resistance training moves are important too, like the DB row and inverted row.
•    Workout INTENSITY is imperative. Don’t go to a lat pull down and put 40lbs on the stack and expect to be able to pull your body weight to the bar (unless you’re 40 lbs ;))

Here’s a video with more tips for you:

Women CAN do pull ups. Thanks to the University of Dayton for proving that a  three day/week program will NOT work for the masses to achieve the coveted pull up. All the more reason to train harder, longer and smarter.

If you want to look and feel amazing as well as do your body good, you really need to consider adding pull ups to your workout routine.

I can help you, just like I’ve helped several others achieve pull up success.

You can check out my ‘alter ego’ here and see if this program is right for you. You’ll find a great body weight workout program, as well as one that you can use with equipment. You’ll also love the ‘endurance power builder program’ that will completely replace traditional cardio. 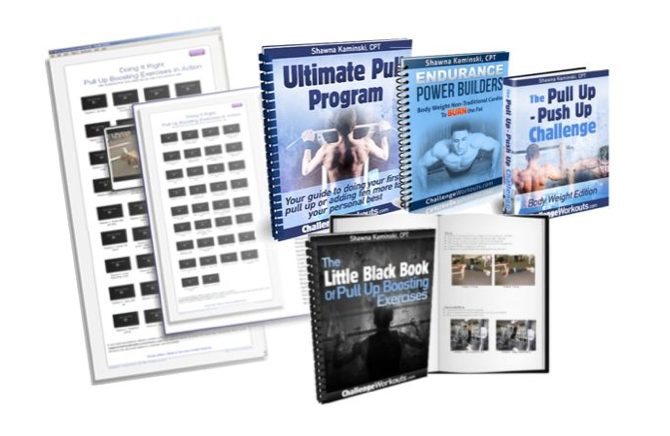 I’ve gotta go find my pull up bar now, that University of Dayton study really riled me up.