Recently you may have read why women ‘CAN’T do pull ups. Both the New York Times and the Globe and Mail published this ‘fact’. 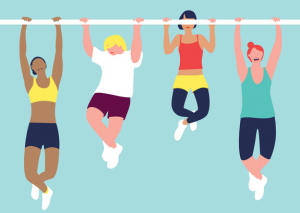 A study at the University of Dayton took 17 normal sized women and had them ‘train’ three times a week for three months. Apparently, the focus of the training was on weight lifting to increase bicep and lat strength and aerobic training to lower body fat. At the end of the study, women had increased their upper body strength by 36% and lowered their body fat by 2% but only 23% (4/17) could do a single unassisted pull up.

The professors of exercise physiology were dumb founded.

One reason women were unsuccessful at performing pull ups they concluded was due to the fact that women have higher percentages of body fat and an inability to be able to lower body fat into the single digits the way men can. Men can ‘conceivably’ get to 4% body fat while women can only get to 10%. Also the lower testosterone levels in women is also to blame as this inhibits muscle development and encourages fat storage.

‘Experts’ claim that pull up success is a combination of strength, low body fat and short stature.

They claimed that those of shorter stature have more of a mechanical advantage than their taller counterparts. This is due to the fact that the longer the lever, the more difficult a pull up is to perform. An interesting related fact is if you compare a smaller athlete to one with the same build but is 30% bigger, the bigger athlete will be only about 20% stronger even though they have to carry about 30% more weight.

Last time I checked the world’s population was in the billions. Do you think the sample size of the study is proof positive that a blanket statement ‘women CAN’T do pull ups’ is correct? Did the researchers do their due diligence in getting a solid representation of all women in this ridiculously small sample size? That’s the first hole in the study…

Next…let’s talk about the workout protocol of the subjects.

How many times have you seen people in the gym ‘weight training’? They have 5 lb dumb bells for every lift, they take 10 minutes between sets while they talk on the phone, prance in front of the mirror, walk to the water fountain. I’ve seen the same ‘bodies’ in the gym for years that never change, never get stronger, leaner, fitter (mind you, they probably don’t get in ‘worse’ shape either…).

The fact is, just because you lift a weight, it’s not magic or osmosis that you’ll gain enough strength in the correct muscle for pull up power to blossom. For the most part, I can increase strength in pretty much any client with a three times a week program of resistance training, but unless it’s specific and targeted training with coaching on how to ‘engage’ the correct muscles to contract, the pull up will be elusive.

The pull up is a ‘learned’ movement. You have to connect the mind to the muscle. I know that sounds ‘woo-woo’ and all, but people are actually stronger than they think. And if they can ‘think’ pull up, that is, if they can engage the stronger muscles of the back, then they’re more likely to be successful at pull ups.

Aside from the whole mind-muscle connection, pull up success requires hard work, some would say ‘gruelling’ work, training to failure and some pull up training tricks.

Who better to do this than women? Who, by the way, are generally of shorter stature than men.

There goes that argument.

Yes, longer levers can make for more of a challenge but more so when performing moves like the human flag. A long limbed person will struggle with the flag more so than with a pull up where the angle of pull is in directly in line with gravity.

What about the body fat argument? Well, it’s true that women tend to carry more body fat than men. Is this the reason they can’t do pull ups? Another ridiculous claim. Give me an overweight man and an overweight woman and neither are likely to be able to do a pull up. The fact is, extra flub is going to weigh down everyone. How many men sporting 4% and women sporting 10% body fat do you see walking around anyway? This is just another excuse researchers used to defend the fact that they don’t know how to teach ANYONE, men or women how to do pull ups.

By the way, where was the study that tested men using the same protocol? That would be a revealing study. It’s my guess that these researchers would have minimal success with men too. Would they then claim that ‘men can’t do pull ups’ too?

The truth of the matter is, pull ups are HARD, but they aren’t impossible, especially not for women.

Do women have to work hard at achieving a pull up? You bet. So do men.

Here are some tips women can use to rock the pull up bar:

* Women are typically lighter and shorter than men, so don’t be discouraged.
* Body position is possibly THE most important thing to learn first to be successful at the pull up. Get under the bar versus trying to get up and over the bar.
* You need to develop grip strength which can be done with a simple vertical hang. If your body weight is too much at first, start with an assisted vertical hang with the feet on a chair of some sort.
* You can do assisted pull ups and band assisted pull ups to start.
* You need to work core/abdominal strength; hanging leg raises are great for this.
* You need to develop upper back muscles through other resistance training moves like the DB row and inverted rows.
* You need to give it all you’ve got: INTENSITY is what it’s all about. Don’t go to a lat pull down and put 40lbs on the stack and expect to be able to pull your body weight to the bar (unless you’re 40 lbs ;))
The good thing about women, specifically women I’ve trained, is that they’re STUBBORN and determined. Both good and necessary qualities to maximize your pull ups. (I tend to be one of the most stubborn people I know, a definite drawback in many regards I might add).

A ‘never say die’ attitude is also helpful. However, this attitude can be a double edged sword when injury prevention is concerned. The saying ‘no pain no gain’ isn’t completely true. Listen to your body. Joint pain or unilateral pain is generally a red flag to stop what you’re doing and re-assess.

Women CAN do pull ups. Thanks to the University of Dayton for proving that a half a$$ed three day/week program will NOT work for the masses to achieve the coveted pull up. All the more reason to train harder, longer and smarter.

Do more pull ups with my help HERE