Here’s an article from my pal, Shaun Hadsell that I know you’ll enjoy:

The Pros and Cons of Carbs

Have you ever been to a physique contest? I’ve noticed one thing in particular that everyone of these physique competitors have in common…

They ALL use carbohydrate “manipulation” as one of the main nutrition factors that they focus on to get seriously lean. Carb manipulation simply means cycling carbs strategically on a daily or weekly basis.

And there’s absolutely no reason you can’t do the same exact thing too.

But first, you need to realize that carbs are not necessarily the enemy all the time. In fact, they can actually be your best fat burning friends – IF you use them strategically.

So if you really want to control fat loss once and for all and learn how it’s possible for you to “mimic” the fitness pros who sport a six pack abs and super models who keep their tummies flat, it’s crucial for you to understand the pros and cons of carb intake.

Trust me, it can be a love-hate relationship.

The Pros of Carbs

The Cons of Carbs

Additionally, grain-based processed carbs such as cereals, breads,  and most pastas contain “anti-nutrients” and gluten that can block fat-loss and potentially lead to various types of autoimmune diseases and internal inflammation. 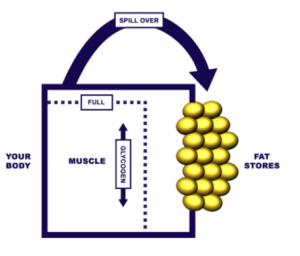 Now you can see why people think you can just cut out carbs to lose weight.

Obviously there’s a lot more to it because we need carbs to stay healthy and keep our metabolism happy and burning fat. (Note from me: I never felt so STUPID as I did the time I did a NO carb diet…well, it’s difficult to go with NO carbs, but I kept carbs to less than 10g/day. I felt no reason to live (well that’s a little drama), but your brain prefers carbs to function properly and if you’re someone that has a hard time switching into ketosis (a different energy system) like me, your brain won’t like you very much…)

Additionally, low carb diets really only work for 5 to 7 days at a time before your thyroid and leptin levels react negatively to slow metabolic rate and suppress fat burning hormones.

Now you can see the crux of carb intake. It can be a double-edged sword.

That’s why you gotta get “sneaky” and cycle your carb intake to maximize both your health and long term fat-loss. And that exactly what I show you how to do in my 4 Cycle Fat-Loss Carb Cycling System.

You’ll discover exactly how to eat LOTS of carbs and NEVER store them as fat with a brand new technique called Macro-Patterning™ and it’s pretty darn cool if I do say so myself.

In fact, it’s mandatory that you use high carb days and even your favorite cheat foods when using my new system.

You’ll use your favorite carbs to:

1. Stimulate the hormones that control your body’s ability to burn off stubborn belly fat

2. PREVENT the metabolic slowdown that causes plateaus when trying to lose weight with a traditional “diet”.

3. Double the fat-burning effect EVERY time you exercise

That’s what makes my 4 Cycles of Fat Loss unlike any other nutrition plan on the planet.

The end result? You RID “dieting” from your life forever and AVOID rebound weight gain once and for all.

If you can eat all your favorite carbs at the RIGHT times so you’ll NEVER store them as fat.

If you do eat carbs at the wrong times, you’ll be scratching your head wondering why your belly isn’t shrinking. So here’s 3 simple carb timing tricks you can use to eat loads of carbs without worrying about them “spilling” over and being stored as ugly fat on your belly.

A good time to consume healthy carbs like non-processed starches and fruits is first thing in the morning or upon waking up — for a few reasons.

This is especially effective if you workout in the a.m.

The best time to consume carbs from starches and fruits is in your post workout anabolic window of opportunity, which is anywhere from 1 to 3 hours after high intensity training.

In fact, if you work out late at night you could actually consume your LARGEST carb serving of the day right BEFORE bed and not worry about fat spillover.

This works best when you’re following more of a maintenance schedule so I don’t recommend using this tip when trying to achieve rapid fat-loss, but it does prove the point that eating late at night doesn’t really make you fat.

That’s because when you work out intensely enough you’ll set off several powerful metabolic triggers no matter what time of day it is:

The end result ends up being increased fat loss and something called “super-compensation” through stimulation of Glut 4 (a glucose transporter).

This effect simply means storage capacity inside your muscles and liver that’s well above normal levels, which is greatly enhanced during the post workout window.

Other benefits include increased insulin sensitivity, glucose uptake, and glycogen synthesis. Again, under these conditions your body will store carbs (and other macro-nutrients) at a much faster and higher rate than normal.

This is why it’s so important to eat the majority of your impact carbs in your post workout meals.

Regardless if your goal is fat loss, strength, performance, energy, improved health or anything else, it’s critical for you to understand the process of carb timing.

Over time, you’ll improve your insulin sensitivity dramatically, which will improve your body’s ability to burn ugly fat as fuel on a daily ongoing basis.

That’s why it’s so important you learn how to cycle your carb intake. You’ll be able to take total control of your metabolism and maximize fat-loss. And that exactly what I show  you how to do in my brand new 4 Cycle Fat-Loss Carb Cycling System.

The weight-loss industry has needed a solution like this for years so it’s something that I HIGHLY recommend.

GRAB this system. You won’t regret it. And right now it’s HALF price to celebrate the official “release party” going on this week only.

But wait. If that’s not enough to get you off the fence, you also get instant access to my 7 Day Ab “Targeted” Exercise bonus with your ½ price order. 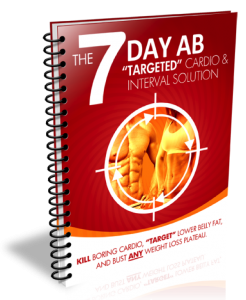 This guide contains some BRAND new extremely powerful techniques that literally forces your body to release the hormones that “break apart” and release stubborn pockets of fat (and even cellulite) into the blood stream to burned off.

So you’ll visually see your belly get flatter in only 7 days. But in addition to that, I show you how you can combine this sequence with my 7 Day Carb Depletion Diet (Cycle 1 of the 4 Cycle Solution) to “see” your belly get significantly flatter.

All in only ONE short week.

Remember, the price doubles in just a few days and the *free* rapid-fat loss bonus disappears for good – so take action now.