I recently came across this study and I went to my friend and fellow awesome Canadian, Chris Lopez to provide us with his insights. Here’s the study and his take on it….

They found that power generated by swinging a kettlebell was greater than that of the back squat and very comparable to that of a jump squat. 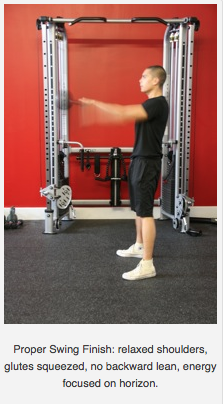 Therefore the Kettlebell Swing has a very large mechanical demand and is an effective exercise for coaches to use with their athletes if their goal is to be able to rapidly apply force.

So what does this mean for you and me?

Back squats, especially at high loads have a spinal compression factor. As a trainer, I’ll never start my new, inexperienced clients with a loaded squat. I find that I have to spend at least 8 weeks with them cleaning up various movement patterns by doing lots of stability and single leg exercises before I consider loading their spine and having them squat to a good depth.

That doesn’t mean that I don’t teach them HOW to squat – I’ll start using the Face-the-Wall Squat and eventually progressing to a KB Goblet Squat. But to throw someone under the bar who isn’t ready for it is the wrong approach. I will, however, teach them how to swing almost immediately (by starting them off with KB deadlifts from the floor and teaching them how to hip hinge properly). In fact, most of my clients will be swinging a 12 or 16kg kettlebell long before I ever get them under a loaded bar.

The issue with performing a jump squat isn’t so much in the jumping, IT’S IN THE LANDING.

Now I’m not going to tell you that you have to be able to squat TWICE your body weight before you can start performing any plyometric (jumping) exercise – imagine telling a 6 year old that she can’t jump around at recess because she can’t squat twice her body weight! But, if you’re over 18 years old and are going to be doing any type of loaded jump squat, then you better be able to land with proper mechanics – on your toes with your knees over your ankles and your butt back with a neutral spine.

Think about a 300lb lineman in football who wants to develop power but at the same time wants to prolong his pro career. Which exercise is not only more effective, but safer for his joints?

Now think about an obese, sedentary individual who desperately wants to get in shape and whose trainer has them start their workouts with plyometrics (you cringe now, but I saw this happen in the gym a few days ago and if you watch The Biggest Loser, then you’ve seen this done before).

Which exercise would be both more effective AND safer to develop power – a kettlebell swing or a (jump) squat?

Now, let me be clear about something…

BY NO MEANS AM I RENOUNCING BACK SQUATS OR JUMP SQUATS. Both are incredibly effective exercises that should be used by all populations.

What I am saying, though, is that as exercisers and especially as trainers like myself, our number one goal when we are designing our own programs or the programs of our clients is first and foremost TO NOT CAUSE HURT OR INJURY

If you have never exercised before or if you know of glaring issues in the way you move, is throwing yourself under a loaded bar the best thing?

If you are overweight and your joints don’t feel “right”, is jumping and landing incorrectly the best thing for you to do?

The study mentioned above has shown that a basic kettlebell swing is just as effective for power & strength development as the 2 squatting exercises mentioned above – with ZERO spinal loading and ZERO impact.

Which exercise would you choose?

P.S. Learn how to swing, get stronger and more powerful AND lose body fat all at the same time with The TT Kettlebell Revolution.

=>Grab your copy of the TT Kettlebell Revolution HERE