I know that your training is all round ‘super’.

I know that the weight you move is again: ‘super’.

And of course, when you put your cape and mask on, you’re certainly ‘super’. 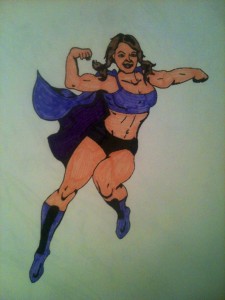 This is my son’s rendition of me as ‘Super Mom AKA The Pull Up Queen’:

I’d say that cape is enough to make me ‘super’ as well.

(Seriously, any 15 year old boy that’s willing to draw his mother with a cape and knee high boots is a pretty super kid.)

But I want to talk about something else that’s ‘super’ and that’s the ‘superset’.

You may already be doing a superset when training. It’s basically an advanced method of training where by you do one exercise directly after another. You can work the same muscle group or different muscle groups. You can work different body systems, for example you can super set a strength move with a cardio move (more about that later). Your goals will determine the type of superset you do.

In a nutshell, here are the benefits of doing a superset:

There are a few types of supersets that you can use…

–Pre-fatigue supersets: In this case, you do two movements that use the same muscle group. The first movement is an isolation type movement and the second is a compound movement. For example, you can do the leg extension first and then go directly to a squat. Once you get to the compound movement, secondary movers need to fire in order for you to finish the movement. You train the isolated muscle to exhaustion while the secondary movers help out.

–Post-exhaustion supersets: This is the opposite of the above. You’ll do the compound movement first followed by the isolation exercise. Example: bench press, DB cable cross over.

–Compound supersets: This is an intense superset where by you combine two compound (multi-joint) movements. Example: squats and lunges.

–The ‘tri-set’: Add a third exercise to the mix. Example: DB lateral raise, DB shoulder press, DB reverse fly (to hit all heads of the deltoid).

I was pressed for time today in the gym so I employed supersets through out my workout. It made for a fast training day. Be warned that when you do supersets, you won’t be impressing anyone with the weight that you’re hoisting. Doing supersets will seriously reduce the weight you use.

This can be a benefit as well. If you’re in a place with less weight (DB’s, barbells etc) available, you can use the superset to increase intensity even without using a ton of weight. In fact, I do LOTS of supersets in my fitness boot camp where we have limited dumb bells.

Here was my workout:

If you want more fun ideas for spicing up your workouts with supersets, my program is full of them.

It makes for fast and efficient workouts where you’re building muscle and strength while burning fat all at once.

Check it out here.