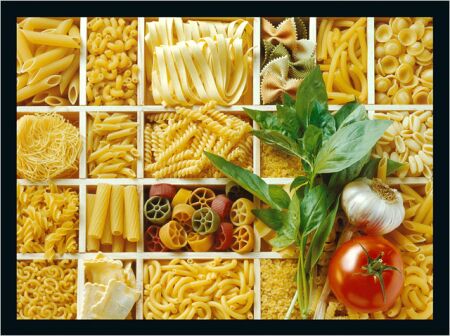 It’s the kind of food that appeals to pretty much everyone. And those that say they don’t like it must be lying right?

Actually, I almost NEVER eat pasta, but it’s not for lack of liking it. I love it, but my belly does not. Well, actually, my belly DOES love pasta and so do my hips and thighs and double chin (I don’t have one of those cuz I don’t eat pasta ;))

What I’m saying is that pasta isn’t your best choice for getting and staying lean, but if and when you do indulge, there are some choices that are better than others.

I wanted to point out a few of them for you to try on the rare occasion that you indulge. I’m also going to suggest that if you’re considering a gluten free diet, that there are four gluten free choices I’ve found for you.

Now Dr Peter Osborne may have some issues with these as he’s pretty much ‘anti-grain’, but I believe that they’ll be a better choice than regular durum pasta.

Each of these values represents a single 1/4 cup (1 oz) serving of dry pasta. The fat content in all varieties is less than 1 gram per serving

*Foods that are naturally gluten-free can be contaminated during the manufacturing process. Always read labels and look for certified gluten-free products if gluten intolerance is an issue for you.

**Pay close attention to cooking instructions of gluten free pastas as they can fall apart if over cooked because the protein gluten holds it together.

You can find whole-wheat couscous although most is made with refined flour in North America. Couscous is a bead-like pasta from North Africa and the Middle East and is usually steamed or boiled and topped with stews. It’s commonly stocked in the grains section of larger grocery stores.

Quinoa pasta
Quinoa looks a little like couscous in size and shape before it is ground into a gluten free flour. It is a seed of a grass-like plant found in the Andes Mountains of South America. It is not technically a grain, but it is often referred to as a whole grain because it is nutritionally similar. It has more protein, iron and phosphorous than traditional flour pasta and is considered a complete protein.

Buckwheat pasta
Buckwheat is gluten-free because it is technically a grass, not a grain. Buckwheat seeds are ground into a dark flour to make pasta also called “soba noodles.” Use caution if you’re avoiding gluten as some companies add wheat flour in the pasta making process. They’re often used in Asian cooking, the noodles are a dark brown-gray color and have a nutty flavor.

Spelt pasta
This is NOT a gluten free choice. Spelt pasta is deeper in flavour, contains niacin and is known to improve heart health by lowering LDL (bad) cholesterol. It’s commonly used in Mediterranean cooking.

Brown rice pasta
This is a versatile pasta that is often found in the gluten free section of the supermarket. It’s actually lighter in color than many whole wheat pastas and it has a mild flavour.

Kamut pasta
Kamut is a type of whole wheat therefore it isn’t gluten free. It has a richer, almost buttery flavor and can be found in many shapes, such as penne, spaghetti and fusilli.

Corn pasta
Pasta made from stone ground corn is another whole grain, gluten-free option. It can range from white to yellow in color, depending on the type of corn used. It can get mushy in soups and other very ‘wet’ dishes.

And I’d be remiss in suggesting to those of you that gluten is a complete NO NO, you need to check out Dr Peter Osborne’s cookbook so you can find super yummy alternatives to pasta and your other favorite foods.