A good videographer is hard to find. Sometimes things just go wrong. Seriously, when filming guerrilla style videos in the gym or at a park, what can you expect? Often I’ll accost some random passerby who looks sort of like they wouldn’t run off with my camera and hope that they shoot a decent video. Sometimes it works, sometimes not so much.

I have two video (bloopers) for you here. The videos aren’t anything to look at, in fact the second one is down right silly, but since I’ve never seen myself move so fast I included it on the blog.

While the videos are lousy, the workouts we did for them are awesome. I did them while I was in San Diego with a bunch of amazing fitness pro’s including ‘Mr Finisher’, Mike Whitfield. Big Mike is a ton of fun and he’s always up for a challenge. We hung out for a day doing videos and working together and basically yucking it up.

For one workout we got a group circuit going when we went to Fit Gym in San Diego. First, a little about the Fit Gym…The gym is a collection of the most beautiful people I’ve ever seen under one roof (where I felt like a total slob with my pig tails). I felt I should have hit the spa first, or at least thought to put some make up on before heading there where there are hard bodies and pretty people everywhere. I figured if I didn’t look good, at least I could be drenched in sweat to give myself a good excuse, so this workout was born.

This video in no way shape or form really shows what our circuit was about. It’s a mish-mash of us doing our own thing. By the time someone thought to shoot the video, the gang was done with the pull up set, so they had resorted to the DB bent over row (even though I called this a pull up circuit 😉 )We lost one of our gang to a bathroom emergency (sometimes intense workouts will do that to you, especially when you’re on the road and not eating and sleeping like normal, too funny when he fessed up to this…).

Our videographer took a break from burpees to do a quick filming here.

We did 45 seconds of work with a 15 second break to switch exercises. We did the round 4 times.

After this one, we went out for dinner and I did a ‘super set’ of sea bass and scallops at an amazing seafood restaurant called ‘Donovan’s’. Yum.

The next day, ‘Mr Finisher’ Mike and I hit Petco park in San Diego. I pondered the possibilities here…what to do, what to do… 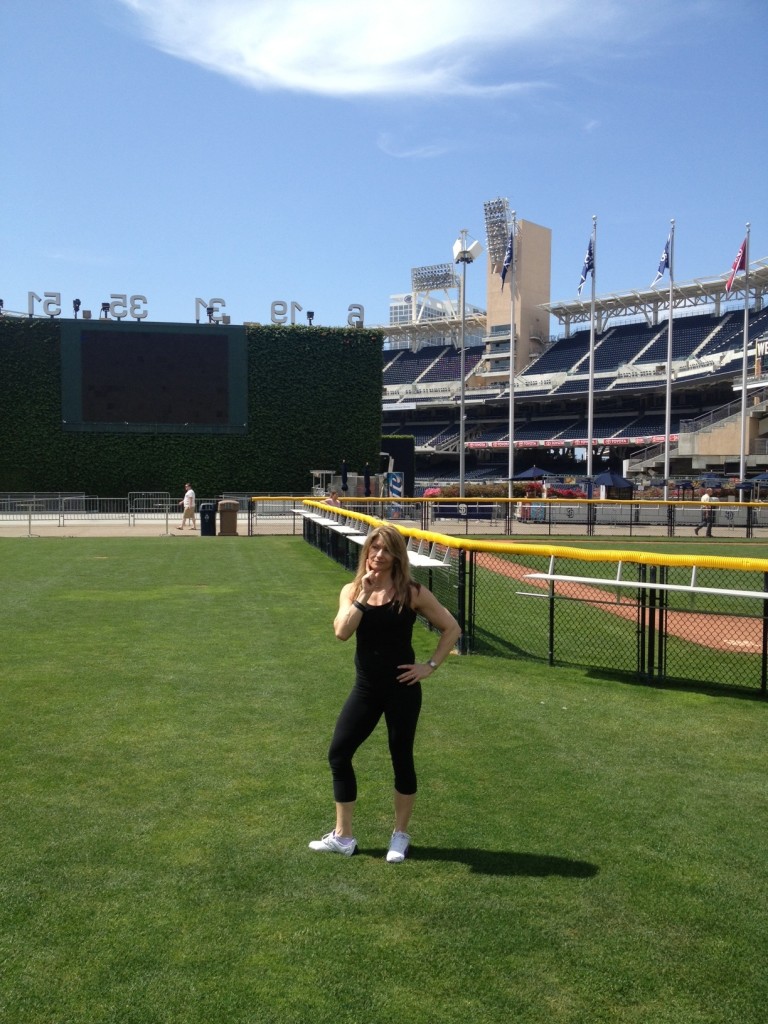 I also thought about my baseball career which was a non-starter at the age of 6 when I was told I ‘made the cut’ but was too little for a uniform. At the age of 6 I couldn’t see the point of playing baseball without a cool uniform so I hit the swimming pool instead. Probably a good thing given my poor vision, I probably would have been knocked out cold with a fly ball.

We decided to do a few workouts together for you. Now you may think that something happened to the camera here in this video, but this is really Mikey and I moving at lightening speed 😉

Okay, so there was something a muck with the camera after all.

We called this the ‘Padre Finisher’ because we did it by a cool statue of some ‘Padre’ dude in Petco park. (Sorry, I’m not a baseball fan…) Too bad the bystander/videographer didn’t get Padre in the shot (he just stood there like a statue, didn’t do anything near as cool or fast as Mike and me.)

Here was the workout (feel free to do it at your own pace):

So there you have some of my blooper reels, but good workouts just the same. Have some fun with them.

If you need some help with your pull ups, I can help here.

Mike  and my buff pal, Travis Stoezel have some cool finishers for you here. These are the ‘hardcore finishers’ I’ve been talking about all week. Don’t even look at them if you’re on the wussy side….;)

These Hardcore Finishers are the bomb. As noted in this post, I’m lovin them. You’ll be pleasantly surprised at how you can build muscle while losing the flub, all the while getting super fit. I love the whole mindset aspect of Hardcore Finishers. Basically it’s five or six minutes of hell, but it’s so empowering. I get that ‘I can do anything’ attitude when I do them…