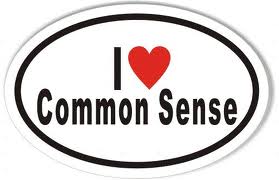 There are several weight loss strategies that you’ll see and hear about,

but none really as common sense and easy to implement as this one. 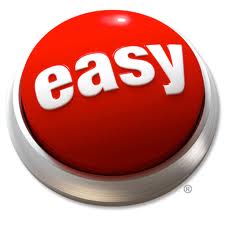 And really, when it comes to lasting weight loss, isn’t ‘easy’ one of the most important things?

Before I get to that, I have to tell you a ‘mom’ story. I pride myself on being a ‘good mom’ and I’m happy to report that my kids have grown into sweet teenagers (as ‘sweet’ as teenagers can be). 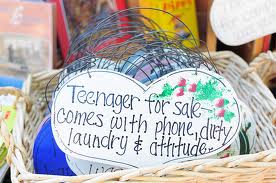 Here they are after our most recent Easter Egg hunt. Who says that teenagers don’t wanna do kid stuff? 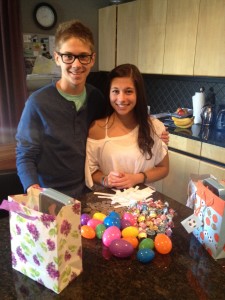 As you can see, they were motivated by $1 and $2 coins in the eggs along with loads of chocolate and clues like: ‘Sweat it out’, ‘Glass Half Full’, ‘I’ll have a cool one’ etc. Silly clues that literally had them up and down three flights of stairs for about 30 minutes. They joked that they were getting a complex that I thought they were overweight and so was making them do stairs (ha ha, my sinister way to get moving!)…in any case…back to the fork story.

It was dinner time and I had set the table for the family but had forgotten the cutlery. . My son was about three when this happened.

My son blurted out ‘Where’s my forken spoon?’

A reasonable question I thought.

That is, unless of course you weren’t accustomed to a three year olds pronunciation of things. In which case, ‘where’s my fork AND spoon’ sounded very different. My then husband looked at me questioning what sort of things we said during the day when he wasn’t there…

No, we didn’t use the f-bomb and he was just asking for his fork and spoon…those of you with little ones will appreciate that. For the rest of you, well, be warned: I’m a mom and sometimes I’ll just go all ‘mom’ on you…like with this weight loss story analogy.

Okay, now back to one of the simplest weight loss strategies there is.

In fact, this may be so simple that you’re reluctant to try it.

Let me tell you the science behind it first.

Your stomach and your brain are like your teenagers. Your stomach knows that it should tell your brain something, but often times it knows that your brain is too busy doing something else to listen. Just like teenagers are distracted with so many other pressing things they don’t listen when their mom tells them to ‘bring a jacket’ or ‘remember your key’.

So, although the stomach will send an important message to the brain, like ‘slow down, I’m full!’, the brain ignores it. Or, the teenager gets rained on and is locked out of the house.

It may not seem very scientific yet, I’m getting there.

First, how many of you eat with the TV on? 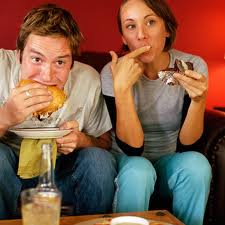 Eat while reading a magazine? 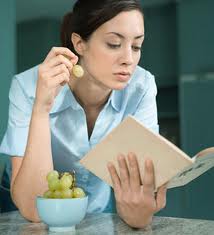 Eat in front of your computer? 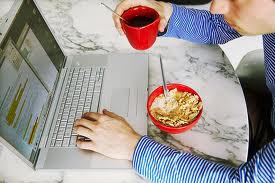 with their noise canceling headphones on.

Your stomach is trying to talk to your brain saying, ‘I’m FULL!’, but your brain is too busy, doing better things to listen. And so you overeat.

The stomach and the brain are connected, but there’s a bit of a time lapse. It takes about 15 minutes for the brain to recognize and say ‘OMGosh, I’m stuffed, I need to go lay down and undo my pants’ because since you weren’t listening, you’ve had an extra 15 minutes to stuff food down your throat.

There’s an obvious solution to this. 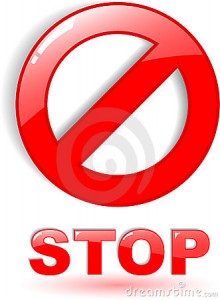 STOP working on your computer or doing any number of other distracting things while   eating. 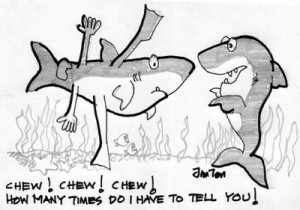 Chew your food. (OMGosh, now I sound like your mother!).

Put your fork down between bites.

Give some time for your stomach to tell your brain, ‘I’m full’ and when the brain is paying attention, you’ll feel full and actually stop eating. You’ll save yourself loads of calories. You’ll feel full, a better word is ‘satiated’ but not stuffed.

I know it sounds too simple to work, but it really does work. It’s a matter of enjoying your food,

being in tune with your body, listening to it’s cues.

Unlike teenagers, who aren’t as simple to deal with at times (but totally loveable).

PS. I should probably remind you that there are a ton of other common sense ideas in my friend, Brad Pilon’s program. You can check it out here.