Do you have a suspension trainer?

Okay, so you twisted my arm…the TRX totally rocks. It’s the best suspension trainer out there. I recently met two of the trainers in the research and development department for TRX and I can’t say enough about the TRX and the company in general.

Learning to train on a suspension trainer is fairly intuitive. If you’ve got some body awareness, you can pretty much take any movement and modify it for the suspension trainer. The cool thing about it is that anyone can do almost any movement by changing the angle of pull. So, for example with the chest press, if you’re a beginner, you’ll pretty much stand up with the feet far away from the anchor. If you’re a seasoned athlete, you’ll move the feet closer to the anchor to increase the resistance. Then you can really amp the chest press up and switch on your core by putting your feet in the foot cradles and do a suspended chest press or push up.

Your core will be talking to you long after you’re done your suspension training workout. It’s a very functional way to train.

On with the challenge…

This challenge can be done with any suspension training exercise, but you’ll likely want to choose one that’s one of the more challenging ones like the atomic push up or the suspended burpee.

Here’s the atomic push up flow: 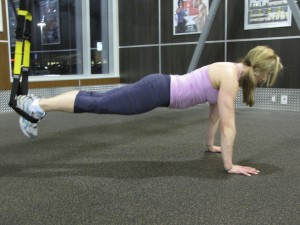 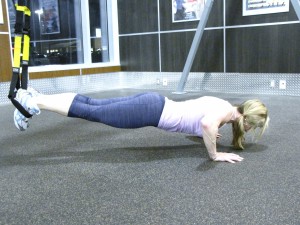 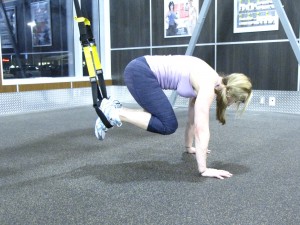 The way the challenge works is this:

Do you see a pattern? Obviously.

If you get to 10 reps of the movement, you’ve actually done 55 reps.

That’s a lot of reps!

Stay tuned, I have a suspension trainer module coming up that will help you get more pull ups (go figure…)