I know you love pull ups and you’ve been introduced to finishers with my pal, Mike Whitfield.

Last time we were in Vegas, Mike and I did this workout together. This is in the gym that we were soon kicked out since we didn’t have ‘permission’ to video in there. As you’ll see, there was no one else in the shot and there was only one other person making a racket on the treadmill behind a pillar. Not sure what the issue about filming was, but we were able to sneak in this video and another one you’ll see posted soon.

At least the management had the courtesy to wait until after Mike and I were done the finisher to tell us to stop taping. When they asked if we had permission, I was all for just saying ‘yes!’, but Mike, Liz DiAlto and Roman (John Romaniello) thought that honesty was best (really?). Mike and Roman proceeded to the office to get the aforementioned ‘permission’. Whilst that was happening, Liz and I did another video for you, stay posted for that one coming up.

Here’s the cool finisher workout (in the video below) that includes pull ups. Our friend, Liz, filmed the video for us on her camera and as you’ll see, you’ll have to look sideways for the actual workout. (We’re sending her to videography lessons!) So apologies for the kink in your neck…but you’ll get the point of the workout even if you watch it sideways.

Rest as little as possible.

Do this with a friend and alternate exercises. 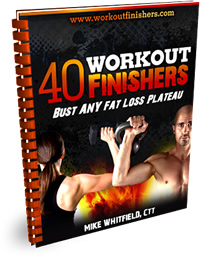 Mike has a ton of great workout finishers for you. He may not be the king of pull ups, but he’s definitely the king of finishers. After all, the finishers he developed helped him melt off the last 30 lbs of the 100+ lbs he’s lost and kept off. Mike showed me his drivers license of when he was heavy, and I didn’t even recognize him. (If you click the link you’ll see him before he lost 100+ lbs.) Those finishers really worked for him, and they can work for you to lean up and get better at the challenge workouts that I send your way.